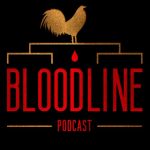 Bloodline explores the largely unwritten history and culture of the gamefowl community, including but not limited to the ancient past time of cockfighting.

This episode explores some potential future topics from this rich history, and I share my own story with chickens.

Raising chickens with my dad, brothers, grandpa and uncles as a kid, I cared for game fowl strictly as a chore until I was 9 or 10. Dad let us put up a show, make the selections, put the roosters through the keep, pick the pit, a 5-cock gaff derby in Oklahoma, and split all the winnings.

My brother and I took turns holding the roosters as dad tied the gaffs in the cock house. We lost our second fight, and despite it being a hot day in June, I prayed and prayed the 20-entry derby would break open and give us another shot at the money, and that’s just what happened when we won our third fight, giving the last undefeated entry a loss.

We wound up winning two more and splitting the pot, which was nothing to write home about. I was more concerned with the trophy. We drew straws for the hardware and lost. After that, I was on the chicken yard every day. Over the next couple years, I started to dream about being a professional cocker when I was older. Within three years, though, the last states began to ban the age-old sport. Within the decade, the dream was forbidden. The passion was sincere, though.

I moved on for a while without it. By late high school, all I wanted to do was write for a living and I set out for college to make that happen. I did my best not to think about it for a few years, and when I finally did, it was clear that what was taken cannot be reconciled without action on my part.

This isn’t some frivolous or inconvenient law, where we all grumble until we resolve to suck it up because it’s not worth the fight. We were robbed of something we shared and enjoyed together, and we continue to be robbed because the thing that’s being taken isn’t a cockfight and the people taking it are deceived. Maybe it’d be a different matter altogether if the public had a fair, honest image of cockfighting, a sport that was already ubiquitous when the earliest civilizations began to write histories.

The sport and these chickens have followed the trek of human fortune, travel and trade around the world. A southeast Asian bird, domesticated for cockfighting centuries before the Egyptians developed egg incubation techniques. Wherever human civilization travelled, the gamecocks went alongside them. This ancient relationship between humans and fighting cocks permeates the story of humanity, scratching its mark in the footsteps of most human civilizations.

Early Syrian and Persian civilizations gave religious significance to the fighting cock associated the birds with a religious deity of the time. The Persians would later make a name for themselves in the sport, producing the family of fighting fowl given the same name and coveted for it’s speed and quick ability throughout Mesopotamia. This fact did not stop the Greek military leader and Thermosticles from using a cockfight to spur troops as the Athenian commander orchestrated the allied Greek maneuvers that would lead to the definitive defeat of Xerxes at Salamis.

The moment was significant enough to merit Athenians to make a law after the victory to celebrate the occasion once per year with a cockfight in the theatre. The sport was prominent among Romans, who are credited with introducing gamecocks to the British, whose love of gamecocks would eventually rival that of any civilization before or after, enjoying near universal acceptance among all classes. Schoolboys were given a cock-pence allowance for the regular contests held at school and officiated by priests in return for the losing bird.

Kings and other royalty found competition for their fighting cocks at the Royal Cockpit in Westminster, among other locations. The sport was so favored among nobility that it was sometimes called the royal pastime. Pits were common throughout London, giving several of the city’s street’s their names, and its popularity throughout the country would leave its mark on the English language, art, literature, but first, it’d follow the British and others to colonize America. Among colonials, the sport was second in popularity only to horse racing, enjoying the patronage of George Washington as well as other founding fathers, presidents, statesmen and everyday citizens throughout the country’s timeline, providing a deep well to draw from in future episodes of Bloodline. We’ll begin by sizing up the present with a look at the legal battles waged as the sport slid from one of its most popular periods throughout the 1990s, to outlawed and ostracized in under a decade.

No recent story quite seems to illustrate the current landscape for game fowl farmers in our country than that of Tommy Carrano, who served a year in prison for conspiracy to violate the AWA. The case provides some recent ruler by which we can gauge the length of the long arm of animal law.