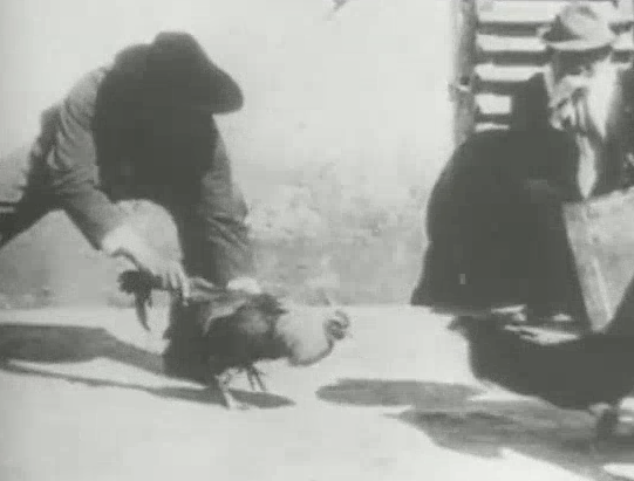 There’s no way of knowing for sure if this film wins the title as the oldest surviving motion picture depicting a cockfight. If it’s not, it’s pretty close.

The first movie ever made debuted in the 1870s and devices to record and project movies weren’t really available until the early 1890s.

Here’s some back-story. In the mid-1890s, Auguste and Louis Lumière patented and began making a Cinematograph, which could record, develop and project motion pictures all in one portable device. They made some of the first for-audience films and charged audiences to view the shows.

In 1896, the company sent filmmaker Gabriel Veyre and Fernand Von Bernard to Mexico to debut the technology and see if they could make any money selling the shows. Veyre’s expedition introduced cinema to Mexico for the first time and resulted in 35 short films, including this one, known as Combat de coqs. Lumiere No. 26.

Many of the films feature then-Mexican President Porfirio Diaz in everyday life (though I couldn’t find him in this one.)

Groundbreaking as the Lumière’s filming device may have been, it wasn’t yet versatile enough to pan left and right to follow action, so the cockfight rolls on and off screen. Like all the Lumiere films, this one is silent.

The camera operator steadily turned a crank to advance the reel and shoot the film. Each Lumiere film was shot with uniform lengths of film that resulted in about 50 seconds of video.