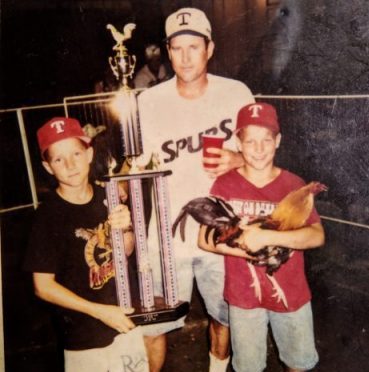 BLOODLINE is a show that explores the history of cockfighting and gamefowl breeding. The pasttime has captivated civilizations across the globe for millenia. Despite this, cockfighting’s history is often overlooked, unwritten and at times censored from the record.

Bloodline explores these stories. Material comes from first-hand accounts as well as primary and secondary historical sources. Episodes are carefully researched to provide an earnest glimpse into the world of cockfighting and the gamefowl community.

I grew up on a game farm in Texas, raising and fighting roosters with my dad, his dad, my brothers as well as some uncles and cousins, but that doesn’t mean this is a podcast only for the gamefowl community. The Intro Episode can fill you in on my background with the sport.

Each episode offers the public a glimpse into the world of cockfighting and gamefowl breeding. We’ll meet some cockers and hear their stories. some from the past such as all-time legends like the 12th Earl of Derby from Episode 5. (such as our debut episode with modern-day breeder, Tommy Carrano, hear some stories and learn some things they don’t teach you in school.